September 6 - Hole in the Wall

Current Research in Hole in the Wall Country 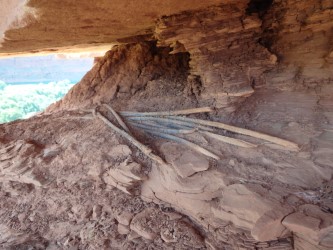 Since 2013, the University of Wyoming Archaeological Field School has conducted survey and excavation on the Hole in the Wall Ranch, near Kaycee, WY. This property, owned by Wold family, contains a rich record of human occupation extending at least into the Late Plains Archaic. Our initial efforts were directed toward recording and analyzing a series of large rock art sites, testing a Late Prehistoric bison jump, and surveying the property for additional surface archaeological sites. During the last two field seasons, we turned our attention towards a large, multi-component open campsite, the Jameson Site (48JO2). The Jameson Site is located at the foot of a prominent butte called Castle Rock. Castle Rock is an imposing, notable landmark in the Hole in the Wall country. This aspect, in concert with its close proximity to the Middle Fork of the Powder River, led people to camp at the Jameson Site for many thousands of years. So far, we have documented no less than three archaeological components at the site, including a series of stratified Late Plains Archaic occupations, a dense scatter of Late Prehistoric camp debris, and a handful of Protohistoric artifacts and features. Notable finds from the site include a well-intact, ca. 3,000 year old feature and living floor containing many thousands of flakes, stone tools, and bison bone (Figure 1), multiple types of Late Prehistoric shell beads, including one dentalium shell, a cached bundle of bark and a separate cached bundle of eleven sticks, possibly used in gaming (Figure 2), and several new rock art sites, including multiple horse petroglyphs and a hand spray. The Jameson Site is very large and in places very deep (up to four meters), so we are still trying to understand its spatial and temporal extent. Continuing research at the Jameson Site will focus on recovering a larger sample of Late Prehistoric remains via block excavation, determining the ages of the deepest cultural deposits at the site, and recovering the remainder of the Late Archaic materials encountered during 2016. 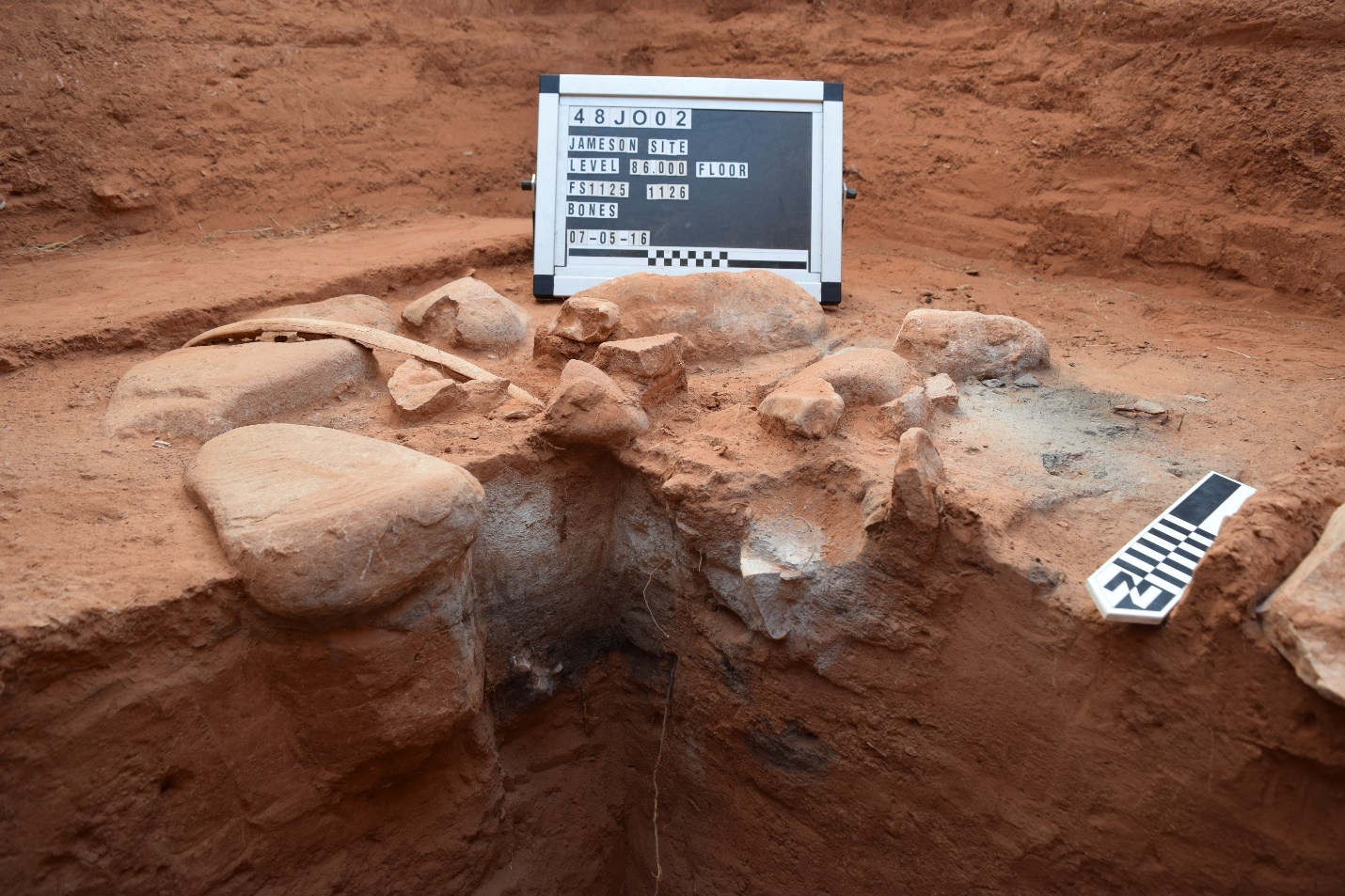 Figure 1: Late Plains Archaic feature and living floor (ca. 3,000 BP) encountered during a 2 x 2 meter block excavation at the Jameson Site (48JO2) during 2016. Note the bison rib and distal tibia located within the feature, as well as the chipped stone drill and flakes in the ashy stain at the right side of the feature. 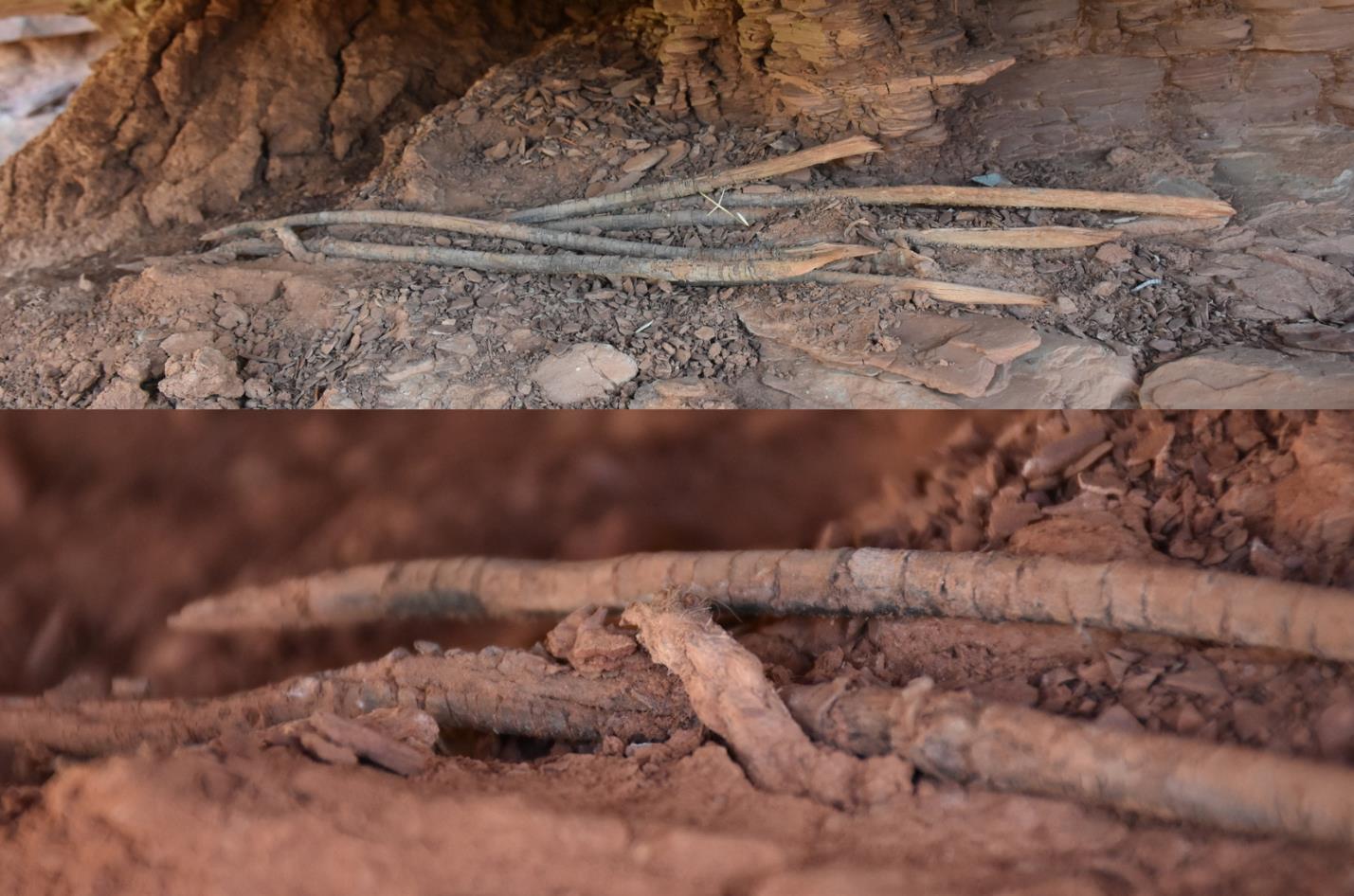 Figure 2: Bundle of 11 sticks found cached in a high ledge of Castle Rock during the 2016 investigations at the Jameson Site. At present, a ladder is necessary to reach this part of Castle Rock. The sticks’ ends have been cut with a sharp blade or knife and they are bundled together with several strips of twisted cordage. Interestingly, some Plains Native groups played a form of gambling with 11 sticks, leading us to believe these might be gaming sticks.